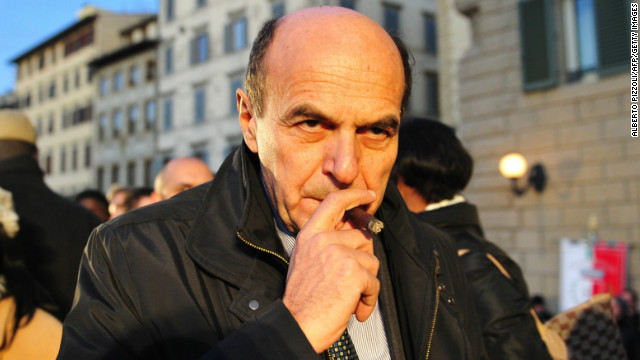 Can a Bersani-Monti coalition work for Italian economy? London (CNN) — Italy’s electoral run-off between an ex-communist and a former cruise ship singer threatens to throw the country back into the spotlight of the European debt crisis.

The enigmatic leader of the center-left Democratic Party, Pier Luigi Bersani, goes head-to-head with scandal-laden former Prime Minister Silvio Berlusconi — back from the political grave following his resignation in November 2011.

Incumbent technocrat premier and eurozone darling Mario Monti, meanwhile, is lagging behind in the polls.

The cigar-chomping Bersani is favorite for Italy’s top job and proposes to steer the country’s battered economy through a debt crisis that is still plaguing the eurozone three years on.

Following six consecutive quarters of recession and with unemployment at 11.2%, Bersani is pursuing the euro area’s latest fad to revive Italy’s ailing economy; a pro-growth agenda.

Such policies are a stark contrast to Monti’s cocktail of cuts and taxes served up to woo policymakers in Brussels and Frankfurt. Growth will be the “golden rule” to attract foreign investment, according to Democratic Party number two Enrico Letta. A similar sentiment was key in sweeping socialist French President Francois Hollande into the Elysee Palace in 2012.

But Letta stresses that Bersani will not follow Hollande’s lead by proposing a 75% income tax for the country’s wealthiest residents.

Speaking to CNN, Letta said: “It will be different, we already have a very high level of taxation…the main point is not to increase taxes.”

Bersani — who promises to stick to the outgoing government’s plans for pension and labor market reform — will also keep Monti’s reviled property tax, known as IMU. It’s a policy that Berlusconi pledges to scrap if elected.

In an interview with CNN, Bersani says he plans to make the tax “more progressive” and focus on the owners of large properties if his party wins.

But for all Bersani’s talk of change, bond strategist Nicholas Spiro dismisses the 71-year-old as no reformer and says he is “not up to the task” of hauling the Italian economy out of a “knee deep” recession.

Spiro, managing director of Spiro Sovereign Strategy, says “Bersani could very well go for taxes on the rich, but Italy has a massive tax evasion and compliance problem, that could be difficult.”

Can a political marriage survive?

Politics in Italy is complicated and outright victory for any party is unlikely. If Bersani wins he may be forced to form a coalition.

An alliance with the flamboyant center-right leader Silvio Berlusconi is unthinkable — which leaves Monti the most likely candidate to support a Bersani-lead government.

But Monti is viewed with suspicion Bersani’s far-left partners, Left Ecology Freedom, who believe the technocrat would pull a left government too far to the economic right.

If the parties can strike a deal Monti would be offered “an important role” to be discussed “Monday afternoon,” Letta told CNN. He refused to say if the technocrat would be appointed finance minister.

Monti, a former European Commissioner in financial services, wields the power to reassure European leaders that Italy is on the right track and can act as a counterbalance to a leftist government.

Bersani, by contrast, is a mystery on the international stage, according to Paola Subacchi, an economist at London-based think tank Chatham House.

“He is not known abroad and he doesn’t speak English… But his whole agenda is pro-Europe and pro-euro.”

A Bersani-Monti marriage is unlikely to be smooth. The two could clash over unpopular austerity measures implemented by Monti as part of a European agreement.

Filippo Cavazzuti, former Italian senator and economist at the University of Bologna, believes Bersani will be forced to maintain Monti’s policies under the European fiscal compact.

He said: “Otherwise Monti leaves [the coalition], the spread [on bond yields] rises and the credibility with the eurozone will immediately disappear.”

A coalition agreement is crucial to stifling a power-grab by Italy’s political bad boy, Berlusconi, is gaining on Bersani’s seemingly unassailable lead in the polls.

Berlusconi is using his showman charm to mount a comeback for his People of Freedom party and holds key regions in Veneto and Lombardy that could prove crucial, particularly in the battle for the Senate.

The election will hand down a “damning verdict” to the policymakers of northern Europe that Italians are fed up with austerity, according to Spiro.

The electoral campaign, Spiro added, has been: “Very ugly, devoid of substance and purely based on personalities”.