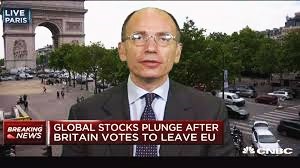 A firm supporter of Britain remaining in the economic group, Letta told “Squawk Box” he now wants a quick United Kingdom divorce from the EU and measures put in place to prevent other countries from following suit.

British leaders have expressed the desire to take a more measured approach in separating from the EU, saying they’re in no rush to invoke Article 50 of the Lisbon Treaty, which begins the legal process for leaving.

“I think we need to apply this article as soon as possible,” said Letta, dean of the Paris School of International Affairs at Sciences Po. “We have run this divorce as soon as possible in order to remove uncertainties.”
Letta called Johnson’s statement a “joke,” saying Brexit supporters can’t have their cake and eat it too. “It’s impossible to say now, ‘yes we decided to leave, but we don’t want to apply the Article 50 of the treaty.”

Once Article 50 is invoked, a series of negotiations would begin about how to disentangle the U.K. from the many EU structures. The process could take two years or more, if both the U.K. and the European Council agree to extend the discussion period.
Saying he was “very sad” about the vote, Letta said that members of the EU need to react with “one voice” to affirm the group’s mission of economic solidarity on the continent.
Founded in 1951, the EU has 28 members, including Britain and founding nations Italy, Germany and France. Several subsequent expansions of the group have led to the participation of most of Europe.