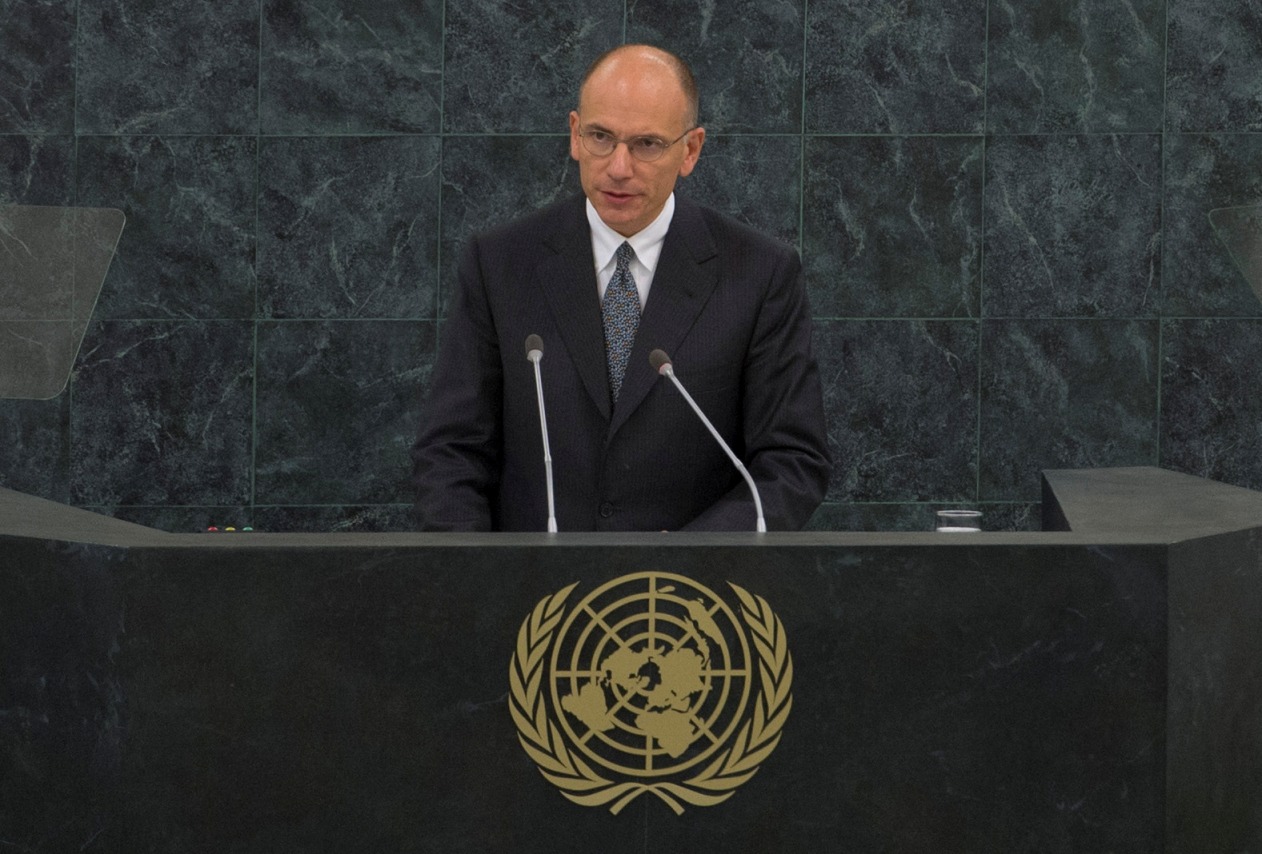 Mr. President,
Allow me to congratulate you on your recent appointment as President of the United Nations General Assembly.
You can count on Italy’s support in the performance of your responsibilities for the benefit of the international community.
I wish to express my full appreciation of the choice of development as the theme of the 68th General Debate.

With an end to the global crisis finally within reach, it is imperative to make growth and development our first priority.
In the past ten years there has been remarkable progress on the Millennium Development Goals. But we have to work harder.
We need to empower individuals and communities and increase the capacity of economic and social systems to adapt to the rapid changes of our complex world.

With regard to the Post-2015 Development Agenda, Italy shares your view that it will require a “significant evolution in thinking.”
There is wisdom in the old Italian saying, “meglio prevenire che curare (an ounce of prevention is worth a pound of cure).”
We should address the root causes of the ills afflicting our world rather than limit ourselves to the side effects.
Sustainable Development, in line with the Rio+20 outcomes, is the best possible antidote. With this conviction, Italy co-facilitated the establishment of a High-Level Political Forum on Sustainable Development with universal membership.
We are also in favour of reinforcing the Economic and Social Council and of a partial reform of the UN Environment Programme (UNEP).

But development cannot be simply reduced to economic growth and statistics. We must go beyond “GDP” and pay adequate attention to the more comprehensive notion of quality of life.

Special attention should be paid to the role of women’s rights and gender equality. Although women cultivate more than half the food grown in the world, they represent two-thirds of the people who live in poverty and suffer from hunger.
More female participation in the global economy means more equality and growth.

As the Secretary-General’s report notes, in the past thirteen years gains have been made in the fight against poverty. But despite these tangible improvements, one in eight persons worldwide still suffers from malnutrition.

Food Security should be a priority area of action. It combines the need to act locally and globally. It incorporates some of today’s most crucial issues: a sustainable relationship between consumption and production, energy efficiency, and more.

Italy is making a specific contribution to the issue of Food Security through Expo 2015 in Milan. The theme is “Feeding the planet: Energy for life.” More than 130 countries have so far agreed to participate.
Italy will use Expo Milan as an opportunity to exchange best practices on global sustainability in the area of food security and nutrition. We intend to promote new partnerships between the private and public sectors.

As I underlined to the Heads of the UN Agencies based in Rome at a recent meeting, Italy feels that the time has come to launch a new global consensus on food. The UN’s participation in Expo 2015 is consequently of great importance.

An integrated approach to development also involves a focus on its social dimensions.
The projected rise of the world population outlines one of the most serious problems today. I am referring to globalunemployment, particularly among young people. This phenomenon affects every part of the world, including Europe and my Country.We have to combine measures taken at the national and European levels to launch our war against unemployment.

Italy believes it would be important to focus on Small and Medium-Sized Enterprises (SMEs), a true driver for employment. SMEs are well-placed to create jobs for young people, and contribute to social stability. In Europe, 85% of new jobs in the private sector are created by SMEs. Also in the employment sector, great attention must be given to people with disabilities.

Hundreds of millions of people around the world become migrants in a phenomenon that affects both developed nations and countries of origin.
Italy’s geographic location makes it a port of entry for thousands of immigrants. At the national level, we respect the fundamental human rights of migrants and prosecute criminals who engage in human trafficking. At the same time we have fostered international cooperation with the countries of origin and of transit.

On this crucial subject, I wish to quote Papa Francesco, who decided to visit the small island of Lampedusa this summer. He brought a message of support for the thousands of migrants who arrive there from Africa every year.
We should all fight what he called the “globalization of indifference” and feel the suffering of these migrants as our own.

Recognizing that more needs to be done at the national and international levels, we look forward to the second Summit of the High-Level Dialogue on Migration and Development to be held in New York this October.

Since the outbreak of the conflict in Syria, the Italian Government has underlined the importance of preserving the role of the United Nations as the ultimate guardian of peace.
At the same time, we strongly condemn what has taken place in Syria. We cannot be indifferent before blatant violations of fundamental international norms.

Italy is inviting all the members of the Security Council and other relevant international stakeholders to spare no effort in the search for political solutions. This is why the Italian Government welcomed the Geneva Framework for Elimination of Syrian Chemical Weapons. We strongly support the work undertaken in the Security Council toward getting Syria to participate in the Chemical Weapons Convention.

We cannot accept the continuous deterioration of the humanitarian situation in Syria and in Countries of the region. Once again we invite all the parties involved in the conflict to fully respect international humanitarian law. There must be effective protection for humanitarian assistance.

We will continue to keep Somalia high on our agenda. As I confirmed to President Hassan Sheikh a few days ago in Rome, Italy is willing to help the Somali Authorities in their efforts to lay the foundations for an effective and united federal State.
Together with Ethiopia, our Co-Chair of the IGAD Partners Forum (IPF), Italy has convened a Ministerial meeting of the Forum for tomorrow, September 26, here in New York to discuss Somalia.

As the top contributor to Libya, Italy is supporting the country in its stabilization and democratic transition, and we remain fully committed to cooperation with the UNSMIL mission. Before the end of the year, Italy will be hosting the second International Conference on Libya in Rome, which we are preparing together with the Libyan Authorities, UNSMIL and other partners.

Italy reiterates its strong commitment to the stabilization of Mali and the Sahel region. At the national level we are currently funding training for border police in Mali and Niger. We welcome the next High-Level Meeting on the Sahel. The Strategy presented by the Special Envoy of the Secretary-General, Romano Prodi, is a good example of increasing efforts and resources.

Italy is the seventh contributor to the UN general budget.
Since 2006, despite financial constraints, we have been the top contributor of UN peacekeepers among Western Countries. We demonstrate our commitment to peace and stability through our participation in 10 different UN Peacekeeping Missionsworldwide — from the Mediterranean and the Middle East to Africa and Afghanistan.

Italy is engaged in international initiatives related to peace and security, such as the Arms Trade Treaty, which we speedily ratified, one of the first signatories to do so.
Other relevant initiatives include the UN Global Counter-Terrorism Strategy and the United Nations Convention against Transnational Organized Crime (UNTOC).

Italy believes that respect for human rights is fundamental to peaceful coexistence among nations. Our foreign policy will continue to focus on social and humanitarian affairs and the protection of human rights. Wherever human rights are at risk, global peace and security are also at risk.

Italy will continue its efforts to better defend those most vulnerable to violence and discrimination.
Our actions and our thoughts must address the categories most at risk: women, children, religious and ethnic minorities, LGBT persons, human rights defenders and humanitarian workers.
Recent atrocities in Pakistan illustrate the importance once again of the issue of religious tolerance. The United Nations General Assembly should never stop acting to counter religious hatred and fundamentalism.

At the same time, Italy shall continue to prioritize the campaign for a worldwide moratorium on the death penalty.

In the second half of 2014, Italy will assume the Presidency of the European Union.
We want the EU to be more open to the world. This means more European foreign or rather global policy. It also means more trade exchanges with the rest of the world. In this perspective we will host the next Summit of the Asia-Europe Meeting (ASEM) in Milan.

I am convinced that a well-governed Europe can act as a global player.
A good example is the EU Enlargement policy, which succeeded in bringing stability to the Balkans in a very short historical time. It is high time for the EU to rise again to a leading role on the world stage. In Europe we must act now for more unity and formore effective governance.

On the theme of “adapting to a changing world”, allow me to conclude by referring to the reform of the Security Council.
As a leading member of the Uniting for Consensus group, Italy strongly believes that Security Council reform is absolutely necessary. The adoption of any such reform, however, will require the consensus of a large majority of the membership. We need to update the Security Council to today’s world, increasing its accountability, transparency and effectiveness.

To bridge the gap between the different models of reform, all Member States should be ready to engage in the next round of negotiations with a higher degree of flexibility and openness to compromise. We therefore look forward to your leadership and balanced approach in our attempt to reinvigorate the negotiating process.